Like so many other companies, Google is trying to get a handle on how employees will react to so-called hybrid work. The majority of employees are in no hurry to return to the physical workplace. In its annual survey of Google employees, about 70 per cent of the 110,000 employees surveyed said they had a “favourable” opinion of working from home, compared with about 15 per cent who had an “unfavourable” opinion. Another 15 per cent had a “neutral” perspective, according to results viewed by The New York Times. The survey was sent out in February and the results were released at the end of March.

Many employees have now become accustomed to a life without a time-consuming commute, and with more time for family and other aspects of life outside the office. Companies seem to be slowly realising that employees may not be so willing to return to the old life.

Fortunately, Google has some ideas for the post-pandemic office. One of those ideas is to make the workplace happier and more productive.

Google has come a long way.

The first office was a cluttered garage in Silicon Valley, crammed with desks. In 2003, five years after its founding, the company moved to a sprawling campus called the Googleplex. The airy, open offices and creative common areas set a standard for what an innovative workplace could look like. Over the years, the amenities piled up. Food was free, as were buses to and from work: getting to the office, and staying there all day, was easy.

And then.. corona. Throughout 2020 and early 2021, Google employees worked primarily from home. The company learned a lot from this period. Not only did some colleagues find it pleasant not to work at the office, Google was surprised at how productive the employees were. Nonetheless, a few challenges arose. Executives cited the lack of creativity and collaboration, and the difficulty of building a work culture and trust when people were not physically together.

When workers are able to fully return to the office, Google wants to experiment with ways of empowering them by focusing on hybrid working. The aim is to redefine “the office” and paint a new picture of a happier and more productive workplace. Google wants a post-pandemic workplace that accommodates workers who have become accustomed to working from home and no longer want to be in the office all the time.

These plans have been built on initiatives that already started before the corona crisis sent Google’s staff home. Back in 2018, the organisation became convinced that the office environment it had at the time was at the end of its rope. Some employees said they had difficulty concentrating in the office because there were too many people as well as distractions. And some of Google’s office complexes were so sprawling that it took people a long time to travel from one building to another. Office work did not work for many people.

Google wondered how they could do better and focused on three trends to create the best possible workplace:

How Google defines the future of work

Covid has taken the question about the future of work to the next level. The answer seems to be Ikea and Lego. The key word: flexibility. Instead of rows of desks next to ready-made meeting rooms, Google designs “Team Pods”. Each pod is an empty canvas: chairs, desks, whiteboards and cabinets on wheels can be placed in different configurations and completely rearranged.

The criteria that determine the future of work according to Google: 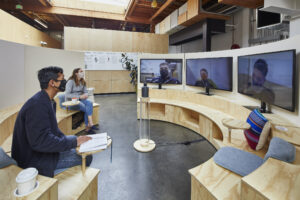 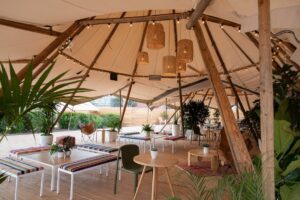 Google shows a lot of creativity when it comes to both flexible and useful office design:

The walls and the heating and cooling systems are two of the most rigid elements in an office design are and Google is trying to change that:

The company is essentially abandoning the popularised theory of the open office plan – that cramming more workers into smaller spaces and taking away their privacy leads to better collaboration.

Real estate costs for the company are not expected to change much. Although there will be fewer workers in the office, they will need more space for their safety and productivity. This is likely to cost Google billions of dollars, which most companies cannot afford.

However, Google has long been a trendsetter in labour practices and office design. Tech companies like them have helped spread the concept of wide-open office spaces with high ceilings and desks crammed tightly together. If these new ideas of a hybrid office environment prove to be successful, Google can of course inspire other organisations once again.

Life unfolds through events and choices

3 ways to ruin your brain

How to survive the Corona Apocalypse (at work)?

16 March 2020
Read More
Close Menu
Manage Cookie Consent
To provide the best experience, we use technologies such as cookies to store and/or access information about your device. By consenting to these technologies, we may process data such as browsing habits or unique IDs on this site. If you do not consent or withdraw your consent, certain features and capabilities may be adversely affected.
Manage options Manage services Manage vendors Read more about these purposes
View preferences
{title} {title} {title}